Ina May Gaskin MA, CPM, PhD (Hon) recently presented at a TEDx in Sacramento, California on Reducing Fear of Birth in U.S. Culture.  She has practiced midwifery for over 40 years.  She essentially brought midwifery back to the United States in the 1960’s after it had nearly been eradicated.  She started the Farm Midwifery Center, where women still flock to have their babies.  As you can hear during her talk, The Farm Midwifery Center has record low rates of intervention, morbidity and mortality and has handled breeches, twins and mothers of more than five babies.  Ina May was awarded honorary doctorates from Thames Valley University, London, England and Shenandoah University, Winchester, Virginia.  In December of 2011, she received the Right Livelihood Award, also known as the Alternative Nobel Prize.  In addition, Ina May has written several books (see below).

Birth Matters: How What We Don’t Know About Nature, Bodies, and Surgery Can Hurt Us
2011

Thanks for visiting! Forcing the Bloom is about learning to let life unfold in its own natural and beautiful way without forcing the "petals" of life open too quickly. Check out our Montessori activities, recipes, and ideas for around the home. 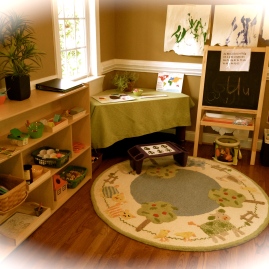 Egg carton activity
Happiness is here
Cooking with a Wallflower
The Adventures Of 5 plus 1!

The musings and adventures of a home educating family..

From This To That Early Learning

A Montessori Teacher, Behavior Therapist, passionate creator of learning activities and soon to be Mommy to twins.

A community of readers

followthatchild.wordpress.com/
Every Day Begins New
Amélie's Bookshelf
Pumpkins and Me